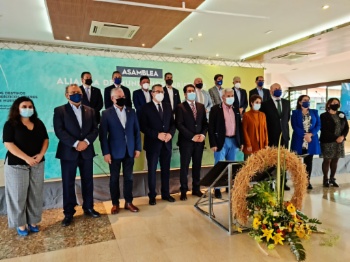 Both, minister Reyes Maroto and president Ángel Víctor Torres commit to strengthening the motor sector of the economy

The mayor of Calvià attended the meeting of the AMT, the Alliance of Tourist Municipalities, which was held in Adeje and in which the I Meeting between the AMT and the AMT Canarias was held, which represent 35% of national tourism. Calvià is a founding member of the AMT whose destinations represented account for 20% of tourism in Spain.

"We need co-governance and at the moment the harmony with the rest of the administrations is great. We all need to generate a strategic plan for tourism that is a generator and distributor of wealth, that generates good training, good employment, good services and welfare for citizenship. This is the great commitment that the AMT and the AMTC seek" , said Rodríguez Fraga.

The AMT and AMTC meeting was held at the Costa Adeje Tourism Development Centre (CDTCA), where mayors, mayoresses and councillors of the 18 tourist municipalities of both alliances met, representing destinations that bring together the 44 % of overnight stays in Spain. 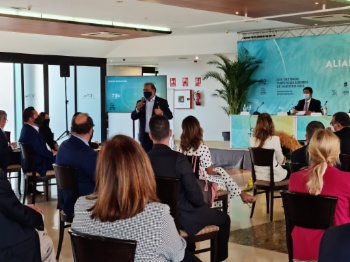 José Miguel Rodríguez Fraga told the media that gathered at the CDTCA that "the tourist municipalities seek to participate in solving the problems that arise. That said in a community like ours and in a country like ours, where tourism is basic. That is why destinations have to play an important role due to our experience".

"We have a financing problem that has not been solved. We need that financing to attend the services. On the other hand, we must provide content with all those messages that come to us from Europe: ecological transition, competitiveness, sustainability, digitisation .... A work that we must do together, businesses and administrations. We must give a concrete content to those words. We must adapt tourism to future needs, for all this that pact for tourism that I talk about, to cause a change of era," added the mayor of Adeje.

"Tourism has been and is the economic engine of the Canary Islands and Spain, but it can be improved. Faced with this challenge we detected awareness and that is why we are going to work together with the rest of the administrations to be present in the decision-making centres", said Rodríguez Fraga.

The president of the AMT and AMTC was queried by the questions that loom over the immediate future due to the rebound in COVID-19 infections at this time in Europe, noting that "we have had a very good start, with high demand. But obviously we are concerned about the growing uncertainty. We do not quite understand that there are people who do not want to be vaccinated. In that, we Spaniards have taught a lesson."

Rodríguez Fraga took advantage of the event to congratulate Antonio Pérez on his management as president of the Sun and Beach AMT, characterised by his defense of the interests of the Alliance member destinations and the sector as a whole.

For his part, Antonio Pérez, mayor of Benidorm, wanted to highlight the growing importance that the Sun and Beach AMT has in the sector and the need to continue being an exemplary and unique alliance that defends the interests of tourism policies that are being worked on from these destinations. 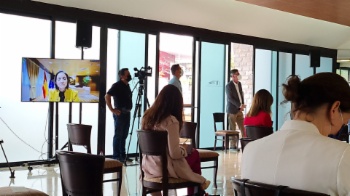 Minister Reyes Maroto took advantage of her intervention to point out that "at the moment we are on the path of recovery and this has to do with the vaccination success. I want to value the efforts of mayors and mayoresses in protecting tourism activity The sector has suffered a lot in this pandemic and that is why we have devoted ourselves to help it. Spain is a safe destination and we are attracting tourism again. We are still far from the 2019 figures, but on the path to recovery. "

Ángel Víctor Torres said that "I attend this forum with the joy that causes us the fact that the Council of Ministers approved the Tourism Sustainability Plan on Tuesday, with almost 50 million for Canarian projects." The president of the Government of the Canary Islands expressed his satisfaction with the beginning of the recovery and launched the idea that "the Islands should take advantage of the situation to take a leap towards sustainability." Torres pointed out that the challenge for the future will be to adapt to the new tourism and applauded the commitment of the municipalities and businesses to "tractor projects."

Pedro Martín stated that “Tenerife council has very clear that tourism is a fundamental pillar of the economy and employment and that is why we have endeavored to strengthen the sector with the priority objective of sustainability. We are awaiting the messages we receive from the municipalities and businesses in order to anticipate and respond to the needs that arise”. In addition, Martín considered that “the definition of a tourist municipality should be the great objective for the future and I encourage you to continue on that path. I think that the councils have a lot to contribute at the present time and thus, together, we can come out of the current situation strengthened. "

AMT AND AMTC
After two years holding the presidency of the AMT, Antonio Pérez, mayor of Benidorm, has transferred the position to José Miguel Rodríguez Fraga. The taking over event took place during the meeting held by the Alliance on Monday afternoon in Adeje.

In the same way, this meeting in Adeje has taken advantage of the change of vice-presidency and secretariat. The previous vice president, José Miguel Rodríguez Fraga, has been replaced by Pere Granados, mayor of Salou. And, finally, Jaume Dulsat i Rodríguez, mayor of Lloret de Mar, has taken over the post of secretary which until now belonged to José Julián Mena, mayor of Arona.

La Palma
José Miguel Rodríguez Fraga announced that the AMT and the AMTC will donate 50.000 euros to the island of La Palma to help alleviate the effects of the Cumbre Vieja volcano eruption. The president of both associations announced the intention of holding a meeting on Isla Bonita next December to show that solidarity and help La Palma's economy as much as possible. 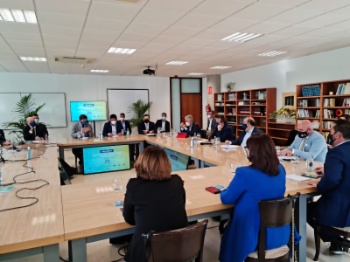 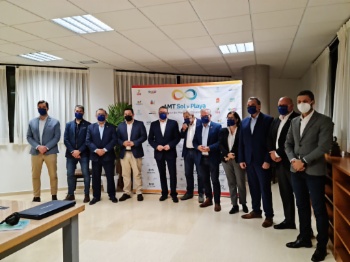 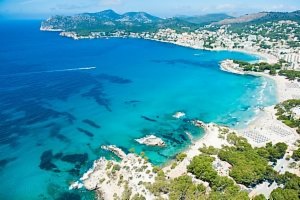 Calvià at the head of tourist occupancy 2021 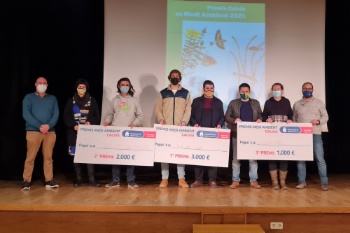 Calvià presents the I Environment Awards 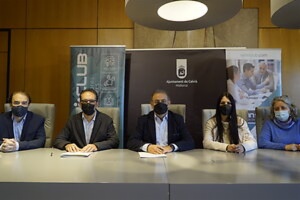 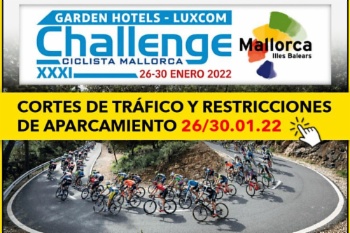